For the second New Narratives assignment we have to create a schematic of the plot and characters of a given movie and also create an ‘artefact’ inspired by it. The film we were given, Jacob’s Ladder, is probably not the easiest film to have this task for – it is a very cryptic, layered film where nothing is as it appears. Seeking to understand the film to a greater extent, I researched Jacob’s Ladder and read various articles (links at the end of the post) and watched the following film analyses:

The film’s events are theorised to be a hallucination experienced by Vietnam war veteran Jacob Singer as he is dying and/or a vision he experiences as his soul goes through purgatory. Considering there were so many layers to the film which were rather open to interpretation we ended up going with a rather basic and linear version of events (which was perhaps somewhat disappointing to our tutors in retrospect, we should have delved more into the deeper meaning of the film).

The film’s director Adrian Lyne cites the art of painters William Blake, H.R. Giger, and Francis Bacon, and photographers Diane Arbus and Joel-Peter Witkin as his primary influences for the rather groundbreaking visual style of the film.

There are many overt references to the Bible and Judeo-Christian religious imagery within the film, such as Jacob’s Ladder itself which references a vision had by Jacob in the Bible, in which he dreamt he saw a great staircase with angels ascending and descending between the levels of Heaven, Earth and Hell.

This ties in with the themes of the afterlife and the idea that after death Jacob struggles with the memories of his earthly experiences and the hellish and heavenly forces seeking to influence his soul. (As an added note, an alternative name for the film was Dante’s Inferno, after the work depicting and describing the 9 circles of hell.)

Many of the characters also have names taken directly from the Bible. Jacob’s wife Sarah is named after the wife of Abraham and his lover is named after Jezebel, the sensual biblical temptress. In the film itself he says he named his sons Jed and Eli after the biblical prophets, whilst Gabe and the other ‘guiding angel’ characters (Michael, Luis) are also named for angelic figures (Gabriel, Archangel Michael and according to this link Luis is speculated to be named for the guiding light of Lus or Bethel).

The religious aspects of the movie are covered in detail by Matthew here. However, as well as Judeo-Christian aspects, scriptwriter Bruce Joel Rubin cites ‘The Tibetan Book of The Dead’ (or the Bardo Thodol) as one of the key influences on the story and themes. Clearly spiritualism in general is a theme of this film, not simply Judaeo-Christian religion but the faith and afterlife beliefs of multiple cultures. 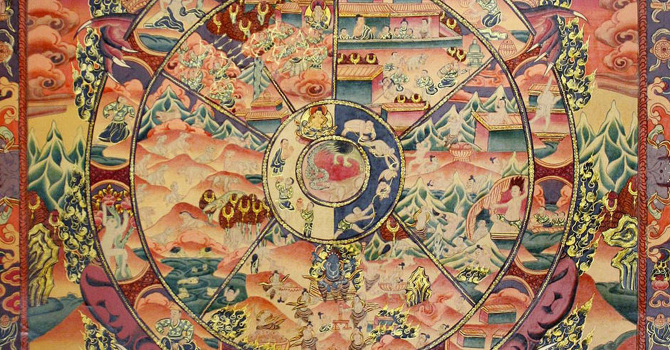 According to director Adrian Lyne, the drug aspect of the story was inspired by the Martin Lee and Bruce Shlain book, “Acid Dreams: The CIA, LSD and Sixties Rebellion“.  Lyne also says that many of the film’s ‘demons’ were intended to resemble thalidomide victims.

The French short film An Occurrence at Owl Creek Bridge (1962)  was also an influence on the film’s story and visual effects. The short story Owl Creek was based on was also called “A Dead Man’s Dream” and the entire film is imagined by a man about to be hanged.

As for the impact Jacob’s Ladder itself has had, the film was a notable influence on the Silent Hill franchise, both the original horror-survival games and the films.

The film’s special effects, created without the use of CGI or post-production editing, also reminded me of the 1982 film John Carpenter’s The Thing…

Meanwhile, the themes of mental trauma and psychological disturbance were reminiscent of the  film Ryan (2004) by Chris Lambeth, which we watched during our Design Discourse module:

The CGI biopic of animator Ryan Larkin has an interesting way of depicting mental trauma, which Lambeth dubbed ‘Psychorealism’ and Karan Singh described as”the glorious complexity of the human psyche depicted through the visual medium of art and animation.” It would be interesting to incorporate some of this into our artefact as I feel it is very relevant to the film’s visuals and themes.

Jacob’s Ladder also depicts ‘sinful’ living and grotesque imagery, which also reminded me of this animation ‘Porgu’, based on engravings by Estonian artist Eduard Wiiralt.

The first part of this assignment is to create a diagram layout or schematic of our given film’s plotlines and characters. For a film with so many layers and possible interpretations, we went with the simpler route of just covering what happens chronologically in the film.

I think trying to have the overall layout of our schematic look like a ladder is a cool idea.

As for the visual design/style of our schematic, the look I’m thinking of is inspired by EMILY CARROL, a Canadian illustrator who works in the genres of mystery and horror.

Carroll’s comics have a precise sense of design and composition, combined with more organic elements such as the use of hand lettered text, bleeding watercolour backgrounds and messy shapes as panel borders. I think that copying her style to some extent in our Jacob’s Ladder schematic could be interesting as I feel it matches the tone of the film.

Another reason I think she is good to look at for this project is that some of her comics make use of the Internet’s possibility for long scrolling images (for example the short story His Face All Red, which is great you should totally read it) and I think that her way of presenting information like this could be useful in the creation of our Ladder schematic.

We have also been considering what form our team’s ‘artefact’ may take. There are not many suitable psychical objects of significant within the film, nor have we yet thought of a way or representing its themes in a single object or image – so we were instead thinking of producing a surreal short film, a series of visuals influenced/inspired by Jacob’s Ladder, in an attempt to reference and recreate its horror atmosphere. Jacob’s Ladder as a film was noted for its landmark work with visuals and effects so it seems quite fitting really.

When thinking about the kind of mixed-media film we could do, I was reminded of the trailer for the indie game OMORI, which mixes pixel RPG elements with rough pencil animations and black and white photography/film collage:

Like Jacob’s Ladder, OMORI falls under the genre of psychological horror, although with a very different aesthetic that is heavily influenced by Japanese media – disturbingly contrasting an overly colourful ‘cutesy’ style with more traditionally creepy elements.

While we’re at it, I might as well mention JUNJI ITO, a Japanese comic artist who is considered a master of the horror genre. His stories are usually tense and dreamlike, where the monsters (if there are any) are only ever glimpsed occasional or at the end of the story, so I would say they fit more into the psychological horror genre than anything. Also the depictions of monsters are usually like grotesquely mutilated or deformed people, which reminded me a bit of Jacob’s Ladder. Ito is also a major influence on both the Silent Hill games and Emily Carrol (both mentioned above).

Since the video project was a little, let’s say, overambitious, the team has decided to instead produce an artifact which is a photo album of Jacob’s memories. The album and the photos within it will become more distorted in the way that Jacob’s hallucinations progress during the movie. I think this is a really cool idea that ties in really well with the movie!

There is more information on Holly’s and Jack’s blogs:

As a visual influence for the distorted portraits of the characters in the album, I showed the others the work of DAVE MCKEAN – who is a prolific and versatile illustrator and artist whom I am a big fan of. He has worked in a range of mediums and often depicts strange and slightly distorted eerie figures in his works so I thought he was perfect to refer to for this.

THE ORIGINAL SCREENPLAY FOR THE MOVIE:

ARTICLES, TRIVIA, BEHIND THE SCENES:

Over 25 years later, Tim Robbins looks back on the cult hit that scarred us for life